The Seoul Museum Association (SMA) made a new plan for the 2013 Museum Week events using the Internet and gamification techniques. The organization formed a network of 24 museums in Seoul as a single group on the Internet, and encouraged visitors to solve 24 missions at 24 venues during seven days (18th-24th May 2013). This system was established based on the seven gamification components set by Zichermann from the stage of design. This paper shows that this new concept of museum network brought many positive results. Over 1,000 people visited the museums in network and 53 people visited more than five museums, even though the participating museums were scattered all over the city. In addition, we collected over 1,000 stories from the visitors to the museums that provided players a special memory of museums in Seoul during Museum Week. Over 70% of the participating museums, moreover, wanted to use this gaming system in the future.

The research presented in this paper emerged from the question: “Can linked museums offer a new and unique experience to museum visitors?”

As of 2012, South Korea had 798 museums including 118 museums located in Seoul (10 national, 63 private, 23 university and 11 non-registered museums). (e-National indicators, 2012) One of the noticeable features of Korean museums is that they achieved seven-fold growth in two decades, like the compressed development of the economy of the country itself (the number of the museums increased from 101 in 1993 to 743 in 2012). The number of private museums in particular rose from 28 in 1993 to 289 in 2012, contributing to the increase in the total number of museums in Korea. This increase in private museums came largely from the encouragement to art collectors to establish private museums under the Museum and Art Gallery Support Act, enacted in 1992.

The problem is that there is a lack of collaboration among museums behind such fast growth. To date, the most representative collaboration project of the Seoul Museum Association (SMA) was a coalition exhibition of artworks displayed by several museums in the same particular space. Other programs did not turn out so well. For example, some of the museums in Seoul also participated in ‘International Museum Day (May 18th)’; however, the desired results were not achieved because of obstacles.

The reasons for such poor cooperation are that the private museums in South Korea were founded by art collectors who have strong goals, and there were unclear objectives as to what to achieve through the collaboration among museums, including national and public museums. Seoul’s citizens found the annual Museum Week to be nothing special except for its free admission, while the SMA had questions about the success of the event with the museums based on the museum network. None of the museums had ever tried to provide visitors special experiences in a certain period of time other than their existing programs.

This year, however, the SMA made a new plan for the Museum Week events using the Internet and gamification techniques. The organization formed a network of 24 museums in Seoul as a single group on the Internet, and encouraged visitors to solve 24 missions at 24 venues during seven days (18-24 May 2013). This project offered a ‘special Museum Week’ to the citizens, an online ‘network development’ to the SMA and a ‘new kind of museum’ to each participating museum. In other words, the program tried to connect visitors and the museums in Seoul that were not particularly connected to the citizens other than that they both were in Seoul, with stories and a quest.

To begin, we will define technical terms and the related work of this program.

‘Gamification’ is an emerging term, referring to the functional use of games. Gamification takes a new approach the attributes of the games in other areas to maximize their effects and benefits. Even if it is not in a traditional form of a game, the approach is to apply game factors to other fields, such as rewarding and ranking systems (Woo Tak, 2011). As Gartner said in 2012, gamification has three broad objectives: i) to change behavior; ii) to develop skills; and iii) to enable innovation. Gamification has proven to be very successful in engaging people and motivating them to change behaviors when designed correctly (Brian Bruke, 2013). The term ‘gamification’ has awakened people’s interest in recent years. The point is that Gamification uses the attributes rather than the external forms of the games to maximize the effects and benefits. Many fields are using Gamification, mostly to encourage a proactive participation of users. The gamification system is completely based on fun, and those who accomplish missions get rewards. This makes people drawn to the game-based products and services rather than existing ones. (Kwon Jong-san, Woo Tak, 2013)

Although there are definitions established by Damien Djaouti, Jon Radoff and Gebe Zichermann, we decided to adopt the theory of Gabe Zichermann on the seven elements of ‘point, level, leaderboard, badge, quest, onboarding, and engagement loops’ to attempt to attract visitors and address the issue of museums. (Gabe Zichermann, 2011)

There have not been many programs on gamification developed in Korea. In cultural institutions, the primary example of gamification in Korea can be said the ‘Stamp Tour’, which is a modification of the ‘Loyalty Card’. Those who receive stamps at several institutions within a certain period will get some reward. In practice, the local government of Gangnam-gu, Seoul holds a museum stamp tour to encourage people to visit the museums in Gangnam-gu for a month in October 2013. If you visit over two museums designated by the authority and get stamps during the period, you will earn a gift. This tour applied the elements of points, badges and engagement loops from the seven elements of gamification to promote participation. Another example is the gamification-based education programs developed for mainly single institution only.

Table 1:  Goal and action plan of this program

This system was established based on the seven gamification components set by Zichermann from the design stage. Based on the premise that the players have visiting experiences at museums, the system excluded the process of ‘onboarding’ designed for newcomers and applied the rest of the components only.

One of the most important factors of museum is the people’s experience of visiting the museum. How to encourage, share or spread such an experience plays a key role in the level of visitor satisfaction. All participating institutions designed the program based on the same fundamental structures of the three factors of expectation, experience and satisfaction. Each museum provides individual missions to give visitors new experiences. (Figure 1) 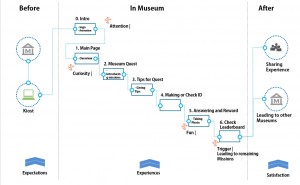 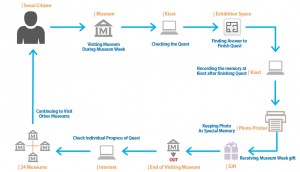 Visitors use the system through the above process at the kiosks installed in each museum where hardware (PC, photo printers) is installed. The web-based system connects all 24 museums. 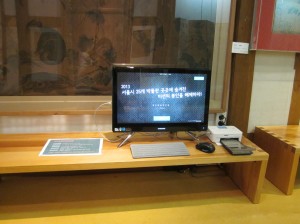 Above all, it was difficult to reconcile the interests of each museum in the program and convince the museums of the need of this program. Because it is a program operated by 24 institutions with different goals, it was difficult to coordinate different interests and the requests of each entity. Some of the museums reluctantly participated in the program although they disagreed with the need for the system. In some institutions, the staff showed enthusiasm but the management was unwilling to join the system. Another issue with the program’s operation was that about 20% of the museums had not been equipped with the basic infrastructure for the system’s operation (Internet, electric cable, etc).

Tim Berners Lee mentioned that the World Wide Web (WWW) is designed to find answers by connecting small parts of the minds of people living across great distances. However, there have not been any attempts in Korea to find the thoughts of the museum visitors by connecting various museums across long distances on the web; the museum visiting experience by sharing their experiences online; or the values of museums. In this regard, this program is valuable.

This new concept of museum network brought many positive results. Over 1,000 people visited the museums in the network and 53 people visited more than five museums, even though the participating museums were scattered all over the city. We collected over 1,000 stories from the visitors to the museums, and provided players with a special memory of museums in Seoul during Museum Week. In addition, over 70% of participating museums wanted to keep the gaming system in the future.

It is to be hoped that this paper will contribute to the promotion of innovation in small museums.